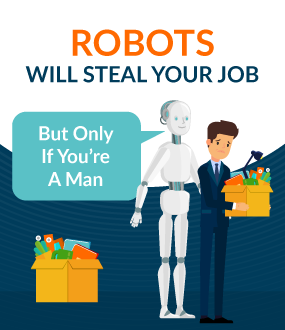 Science fiction has long been warning us of the rise of the robots.

Take Orwell’s 1984, for example, with the ‘telescreen’ that Winston believes he is watching, when in fact it’s the screen that’s watching him. Or Kubrick’s Space Odyssey that foresees Siri and Alexa-like artificial intelligence.

But are these fictions on the brink of becoming reality? Will we soon see a world ruled by robots?

More than 70% of Americans are concerned about this very phenomenon, according to a recent survey by the Pew Research Center. Almost three quarters fear robots will not only take over their jobs, but their lives in general.

The prevalence and influence of artificial intelligence is growing exponentially across the globe. It’s become the driving force behind many of the actions we perform on a daily basis and take completely for granted.

As we browse Netflix, the streaming service uses an artificially intelligent algorithm to give us personalized suggestions based on our previous activity. Similarly, tailored search suggestions appear on Google thanks to AI.

But are the bots something to be feared or embraced? In 2017, Facebook was forced to shut down a pair of bots after they invented their own language that was incomprehensible to researchers.

While Facebook hailed the experiment as a great success and a step forward in creating chatbots that can reason and converse, isn’t it slightly worrying their discourse became impossible for us to understand? Does this signal a potential robot uprising?

Not according to Andrew Ng, Chief Scientist at the Baidu Research Center and Stanford Lecturer, who claims that AI gets a bad reputation.

On the other hand, what he does he believe is that theatrically demonizing AI is a front for the real threat: the displacement of jobs by robots.

With Trump in the White House, steps toward gender equality are stagnating. Despite protests and intense public scrutiny, the gender pay gap in the US is no closer to narrowing, and women all across the globe are still being paid less than their male counterparts.

On the centenary of (some) women getting the vote in the UK, we have to ask ourselves, did the suffragettes think the situation would be better by now?

The question we at Website Builder Expert are asking is: will the rise of the robots be a discriminatory one or not? Who is more at risk of losing their job, men or women?

We mined publicly available data to try and answer these questions. Here’s what we discovered.

Overall, and for both men and women, Japan tops the table as the population most at risk of losing their job to a robot.

Here, we see the paradox of automation. Japan may be at the forefront of innovative technologies and inventions, but this leaves them most susceptible to a robot takeover.

Japan’s job market is heavily reliant on technicians who facilitate the development of the artificially-intelligent bots set to revolutionize the world of work, with just over 1/5th of their workforce employed in this field.

Unfortunately for them, their very creation may be their undoing.

A Win for Women

While automation poses a threat for some, women will finally see some consolation for their years of under-representation and under-pay in the workforce.

In 80% of the 33 OECD countries in the study, men are more at risk of losing their job to a robot than women.

The biggest winners are women in Israel, who are the least susceptible working population in the world to robot takeover. This is due to 30.4% of Israeli women that are employed in scientific and intellectual roles that have a low probability of automation.

While it is men’s jobs who are overall the most insecure, in most countries the difference between men and women is marginal.

Latvia however, is the country where the robots will discriminate most when they come for jobs. Men in Latvia are 8.4% more likely to have their job stolen by a robot than their female counterparts.

Conversely, Finland will be hailed as a gender-equal paradise when robots rule the roost, closely followed by the Czech Republic, with the US coming in a respectable third.

Regarding robot takeover gender equality, Sweden and Norway are the Nordic ugly step-sisters to Finland’s Cinderella, ranking 3 and 4th for a discriminatory takeover.

These two tycoons of the Western World are frequently in fierce competition with one another, but who will come out on top when the robots rise up?

The UK’s workforce is statistically more at risk of losing their job to a robot than that of the US. And, in the US, the probability of automation is also more balanced between genders than in the UK.

American women are safer than their male counterparts, whereas women in the UK are actually at greater risk of robotisation than men, a fact that bucks the global trend.

So overall, it’s a solid win for the US on this one.

Europe’s safest and most endangered countries is a David vs. Goliath battle. Eastern giant Turkey is the European country most at risk of automation, whereas western dwarf Luxembourg takes the top spot for the least susceptible to robot takeover.

The battle between the East and West continues in terms of a gender equal robot world. There is much more disparity between men’s and women’s risk of automation in Eastern Europe than there is in the West.

OECD Top 10 Most at Risk of Automation

70% of these top 10 most at risk countries have an economy most heavily weighted towards the service industry.

This has a relatively high probability of automation – think robot waiters and cabin crew, or receiving personalized in-store shopping recommendations via artificially-intelligent devices – meaning those employed in this sector will likely be out of a job.

It’s not looking great for Eastern European men when the robots come to rule.

These economies typically rely on crafts and trades workers, such as builders, electricians and trades that require skilled manual labor. Unfortunately for them, robots are eyeing up these jobs for poaching.

Women in Germany have ascended to the middle of the professional ladder, if they can break that glass ceiling and attain managerial positions, their risk of automation will decrease dramatically.

All of the countries in the top 10 least at risk of automation have economies based most heavily around scientific and intellectual professionals.

This job category is the ISCO (International Standard Classification of Occupations) category the least at risk of automation, with their probability being only 0.1%.

Men in the US come in an impressive third place for the least at risk of automation, despite their leading industry being craft and trades workers, which has a relatively high probability of automation.

Their saving grace is relying very little on clerical support workers, who are much more likely to be usurped by artificial intelligence – think robot receptionists or the already-in-existence customer service chatbot.

In 80% of these countries, the most prevalent industry for women is scientific and intellectual professionals. Interestingly, the only two countries where this differs are the US and UK, where the women largely work in the service sector.

Although women in professional roles is a close second for both countries, we can’t help but wonder whether more could be done in these Western giants to encourage women to participate more in the knowledge economy, and therefore decrease their risk of automation even further.

We combined Carl Frey & Michael Osborne’s Oxford research paper: ‘The Future of Employment: How Susceptible are Jobs to Computerisation’ with publically available data from the International Labour Organization (ILO) to find the probability of automation for each gender and working sector in 33 OECD countries.

The paper, using a novel methodology, details the probability of automation for over 700 jobs by taking into account nine key skills that are needed to perform it: negotiation, social perceptiveness, originality, persuasion, finger dexterity, manual dexterity, fine arts, assisting and caring for others and the need to work in a cramped work space.

The ILO has a database of the % of people (total, men and women) in each country that work in certain job categories based on the International Standard Classification of Occupations (ISCO).

We categorized the 700 jobs in Frey & Osborne’s study into each of the ISCO classifications and from this were able to calculate the average probability of automation for each category:

We then multiplied this average by the percentage of people working in each category in each country and totaled this to find each country’s total risk of automation. We repeated this calculation for both men and women to find the gender specific risk of computerisation.

We decided to only include OECD countries in the study, as these are the countries who have the financial resources in place to effect an economical transition into a robot-dominated workforce.

Frey and Osborne, The Future of Employment: How Susceptible are Jobs to Computerisation

“Artificial Intelligence has been hailed as the new electricity – it has the power to transform the world as much as electricity did all those years ago. A change is coming, and we’re going to have to change with it.”

Japan will have to be quick on its feet to combat robot rule, whereas those countries less susceptible to automation will have more time to put plans in place.

And, perhaps most interestingly, it will be the male working population who will see the most job insecurity when the age of the robots arrive – who knew they were feminists too?

Although the risk of job displacement is real and many people will be left vulnerable in the wake of robot take over, this vulnerability might not last for long.

There is already talk of retraining programs being put in place to offset job losses, and although the path might be a treacherous one at first, humans will find a way to exist alongside their artificially intelligent counterparts.